12. Ethnomusicology in Cyberspace: Samplertropofagia and Virality in YouTube Videos

The Furagato 5000 is a group formed by the Rio de Janeiro DJs Rafael Armênio (Rafik), Pedro Herkenhoff and Rafael Grego. From 2005 to 2007 the group produced several music videos, under the motto of “momentary hits on the Internet”. The music videos of Furagato 5000 reconstruct the discourse of original videos, bringing new emphases and connotations to them, and are used as the basic rhythm the tamborzão (see below). Here’s the first example: Jeremias was caught drunk by the police while he was driving his motorcycle, so he was arrested. A TV program interviewed him and the video became viral on internet. The “Funk do Jeremias”  was based on this video. and another, in which Jeremias was caught drunk again.

Bill Goiaba was interviewed by the same sensationalist TV program as Jeremia. Bill was caught drunk in a prision. The reporter incited him to sing and the video, as that of Jeremias, became viral on internet. The Furagato 5000′s music video is the result of a fusion of this video and the video clip song “Wonderful”, composed by the american rapper Ja Rule.

The basis of “Funk do Tapa na Pantera” is the video “Tapa na Pantera” (Take a Toke), a short film produced in 2006. The film shows a sexagenarian lady talking about the use of marijuana.

Among Brazilians, in the practice of making this type of video, there is a strong tendency to use the electronic beat known as tamborzão (big drum), which is very recurrent in funk carioca, hence the widespread use of the term “funk” in the titles of the videos. What interests us more closely here is to investigate the form in which this processing is realized in the videos of Furagato 5000, and to seek to identify recurrent compositional elements in the practice of musical cutting and pasting. The concept of the “beat” in funk carioca doesn’t refer only to the percussive instrumentation, and isn’t an exclusive reference to the sounds of drums and percussion instruments. A beat may contain synthesized or sampled sounds referring to keyboards and wind instruments, among others. The beat known as tamborzão is the consequence of a process of nationalization/antropofagia and results from the importing of rhythmic references of from Miami Bass, plus and African-Brazilian elements, such as the use of candomblé and capoeira drum sounds and rhythmic patterns. Below an excerpt with three examples of tamborzão:

On August 19, 2009, a  video was posted on YouTube by an unkonown user who identified himself as “olhoxis”. The footage had been produced months before in the Legislative Assembly of São Paulo. The singer was invited to sing the National Anthem in a solemnity. She goes out of tune, misses and mixes up the lyrics, “invents” parts of the melody and seems to be doped during the performance.

In a week of observation, 85 copies of the original video were identified, as well as 67 other videos that could be considered remixes, parodies and references. It is a rich universe of behaviors, which demonstrates creative processes of transmission and dissemination.

4. Dismantling a Remix – Girl Talk’s “What it’s All About”

A typical example of samplertropofagia is the album Feed the Animals (2008) from DJ Girl Talk (Gregg Gillis), where he uses over 300 song snippets in just over 50 minutes. 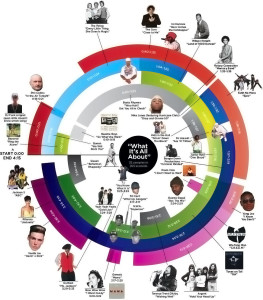 In 2009, after having his guitar broken by United Airlines baggage handlers during a trip, the Canadian musician Dave Carrollsought applied for reimbursement from the company, unsuccessfully. So, he decided to record a video clip telling the story, and then put it on YouTube in July of the same year. A week later, the video had over three million views and a few thousand other videos making reference to it. A Google search for the term “United Breaks Guitars” returned more than nine million results. The case was reported in newspapers such as The Wall Street Journal and on television networks, including CNN, BBC, and CBS, among others. The video spread quickly through websites and information sources on the Internet, setting up a complex network of reactions and discussions, of which were also part the countless other videos that can be considered copies, remixes, appropriations, parodies and references to the original video. Thus, a process of virality was established.